Palladium price has more than doubled since the early 2016 making the white metal more valuable than gold for the first time since 2002. Its impressive performance attracted much attention from the financial press, which published numerous articles and analyses about the palladium market. If you diligently read the analyses, you may learn that automotive industry accounts for some 75% of demand for palladium, that its global production is as little as about 200 metric tons per year (vs. about 3,000 tons for gold), that only two countries (Russia and South Africa) produce more than three quarters of its global supply, and that the demand for palladium is expected to continue to grow. Presumably that implies that palladium price should remain high and possibly continue to rise.

The flaw in analzying any market’s economic fundamentals is that you often have to rely on stale and inaccurate data. Apart from the price, almost anything you read about palladium today (at $1,360 per ounce), was equally true two or three years ago when its price was 65% lower. Supply and demand fundamentals may explain, but seldom predict large-scale price events.

After more than 20 years trading commodities, time and time again I noticed that as a rule, forecasts based on supply and demand fundamentals fail to predict large-scale price events like the one we just saw in palladium market. Most of them by far tend to be anchored in the present condition, predicting future prices that a bit higher or a bit lower than current ones. Only just recently Reuters reported that over 1,000 oil market analysts predicted that crude oil would trade between $65 and $70 per barrel over the next four years (at present, Brent crude oil is trading just above $60/bbl). Only 3% of them thought oil could rise above $90/bbl. With respect to palladium, most ananlysts now predict that the metal will trade around $1,000 – 1,100 per ounce through 2019 – a moderate correction from present levels.

Large-scale price events occur precisely because the imbalances that led up to them couldn’t be foreseen. Had market participants known that palladium price would nearly triple in barely three years, they might have adjusted by switching to platinum (which remains relatively cheap). Producers might have invested to increase the metal’s production, etc. Since future conditions were not foreseen, market forces led to a dramatic price readjustment. This is how markets work. It is also why price forecasts based on supply and demand fundamentals do not.

To avoid massive losses and capture positive value from major price events, market participants do not need to know the future: almost without exception, large-scale price events unfold gradually over time, forming price trends that can last many months or even years. Traders can navigate market trends by reacting to them rather than trying to predict them. This strategy is known as trend-following and it’s been used successfully in markets for many decades. As a case in point, here is how we’ve traded palladium futures using our own proprietary trend following model, the I-System:

Long before the financial press alerted us to its supply and demand imbalance, we have been accumulating long exposure in palladium futures, generating very substantial profits on the price move as it unfolded. The beauty of using systematic trend following is that it is based on the only source of data that is always unambiguous, accurate and timely: the price itself. Any security’s market price tends to reflect all the information known about the security at that moment. We can therefore consider the price of an asset as an adequate reflection of the market’s verdict on its economic fundamentals.

Industry hedgers can use trend following to significantly improve the way they manage their exposure to commodity price risk. Rather than suffering devastating losses from commodity price roller-coasters, they can turn this source of risk into a source of profit and hard to match competitive advantage. The following 12-minute presentation condenses our own 20-year experience in this domain:

For more information, you may contact me at alex.krainer@altanawealth.com.

Alex Krainer has actively traded commodities since the 1990s and has outperformed world’s blue chip managed futures funds over a period of 6 years. In 2015, Alex publsihed the book “Mastering Uncertainty in Commodities Trading” which is still available on Amazon. 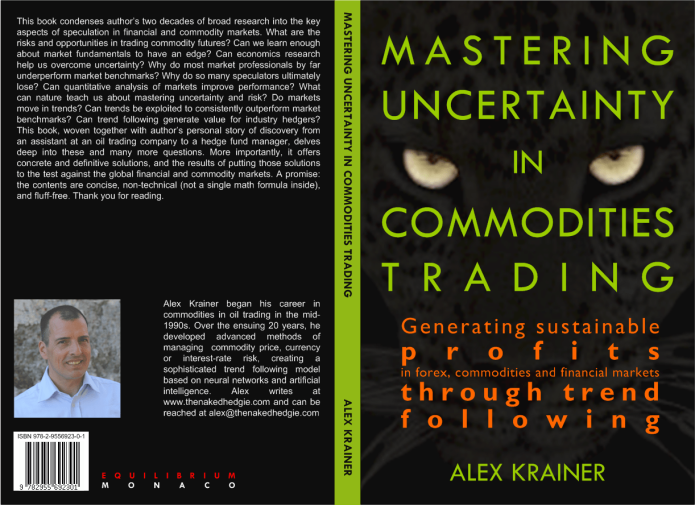