In the age of central bank quantitative easing, trend following has become an unpopular investment strategy, even earning tiself a bad name as trend following funds performed miserably compared to bonds, equities, and passive index funds. Below is a chart put together by AutumnGold showing a growing gap between Managed Futures funds the S&P 500 and Barclay’s Aggregate Bond index. Managed futures funds are a good proxy for trend following performance as most of them apply systematic trend following strategies in one way or another. 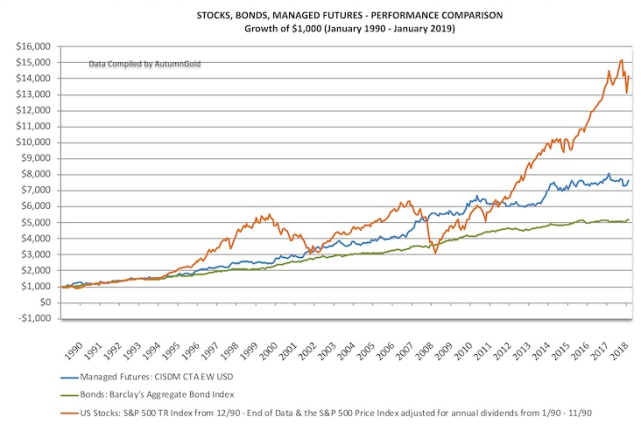 Starting in 2009 when the stocks bottomed, investments in equities far outperformed managed futures funds. However, the fact that over that time we enjoyed the longest ever bull market should be concerning to investors. Markets do correct and ultimately give way to sustained bear markets. Here, again is the Japanese precedent (relevant  in view of the “Japanification” of western economies):

This chart should give us pause. Bull markets can’t – and don’t – go on forever. But when they might turn or what might come in their aftermath is impossible to predict. Let’s zoom in on Japan’s boom years, the 1980s:

Through the current bull market, many analysts have called the top too early. For example, supposedly ‘smart money’ turned bearish already in 2016.[1] At the time, Credit Suisse polled their clients and found that they were about “as bearish on equities as we can remember.”[2]

Some two years later, in April 2018 John Hussman, one of the best respected market analysts suggested[3] that “markets have never been this overstretched without subsequently falling by 50% or more.”[4] His prophecy may ultimately prove correct, but the S&P 500 had since added more than 12%, scaling its last peak a full year later. Of course, investor vertigo at market highs is nothing new. During the 1990s dot-com bubble, analysts equally warned of its ‘unsustainability’ years before the 2000 peak. In spite of that, stock prices kept rallying to new highs.

In just the last 5 months of the dot-com bull market, Nasdaq added over 100%!

How to navigate the roller-coaster?

Again, predicting the timing and the level of the current bull market is quite out of the question and investors should remain sceptical of any such predictions.

Thankfully, managers can navigate market roller-coasters successfully thanks to two major features of the boom-bust cycles. First, reversals from bull to bear market (and back again) are a process. Second, markets move in trends.

1. Trend reversals are a process

What’s true for bull markets is also true for bear markets: they unfold as trends and span a sustained period of time as the above charts make rather obvious. Thus, using trend following strategies should help investors navigate the coming roller-coaster ride. Instead of getting trampled by events they should prosper from them. Let’s take a look once more at the AutumnGold chart: 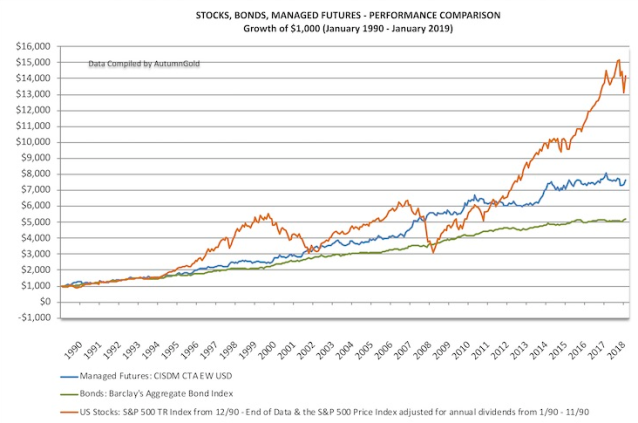 If we focus on the performance of managed futures funds through the post-2000 dotcom bust and the 2007/2008 bear market, we can see that trend followers generated positive returns as most investors sustaine crippling losses. As a trend following practitioner, my fund generated a 36% positive return (gross).

Where do we stand today?

Today, the current bull market could be in the process of reversing. But we can’t be sure – only time will tell. Investors should avoid making big bets either on price forecasts or convictions. In the past we saw many cases where as an economy unravelled, stock markets went hyperbolic. Markets have proven time and again that they can surprise. Rather than trying to predict, investors might be better off simply following trends which, on aggregate simply reflect the collective human psychology at work. That’s the one element in the markets that remains more or less constant. As the old proverb goes, we can’t direct the winds, but we can adjust our sails.

Finally, for investors/traders who might wish to avail themselves of a RollsRoyce quality trend following system, below is an 8-min. YouTube clip presenting the I-System:

Alex Krainer [alex.krainer@altanawealth.com] is a hedge fund manager and commodities trader based in Monaco. He wrote the book “Mastering Uncertainty in Commodities Trading”

[4] In Fact, in his August 2018 newsletter titled, “Extrapolating Growth,” John Hussman’s explicit forecast states that, “Measured from their highs of early-2018, we presently estimate that the completion of the current cycle will result in market losses on the order of -64% for the S&P 500” – https://www.hussmanfunds.com/comment/mc180725/