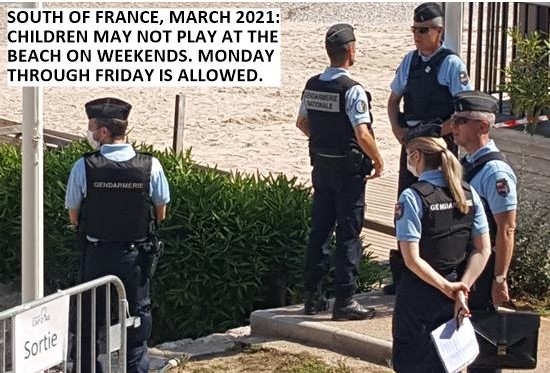 The enemy is fear. We think it is hate; but it is really fear. – Mohandas Gandhi

To ‘normalize’ vaccine passports, the media have increasingly been discussing the idea as we trudge on through the umpteenth version of lockdowns. On Saturday (13 March 2021) I got accosted by the police in Cap d’Ail (south of France) for the offense of taking my kids out in the sun without having a justificatif. I have long lost track of the ever shifting rules of conduct, but I didn’t feel like arguing.

The police were just doing their jobs, enforcing shitty rules that harass and antagonize people. For example, I would have been allowed to be where I was if it were a working day, but since it was Saturday, it was verboten. The objective of such rules is nothing to do with public health; they are intended to exasperate us all to the point where we yield to the indignity of vaccine passports when they are rolled out, just so we can live our lives and be left in peace.

The small, complicated rules that create a flock of timid and industrious animals

Already two centuries ago, Alexis de Tocqueville understood the nature of this dumb, slow march of bankers’ tyranny (see here why I call it ‘bankers’ tyranny). In “Democracy in America” (1835) he predicted that the society would fall into a new kind of servitude which, “covers the surface of society with a network of small complicated rules,” which “does not tyrannise but it compresses, enervates, extinguishes and stupefies people, till each nation is reduced to be nothing better than a flock of timid and industrious animals of which the government is the shepperd.” De Tocqeville’s book was published mere two years after President Andrew Jackson ended the Second Bank of the United States, and the struggles between the bankers and the society was very pertinent to his observations.

The small complicated rules are a sinister trap and it is imperative that we not fall into it. Even if we are ready to yield on vaccines and vaccine passports to end our present predicament, our children and grandchildren will have to live with the consequences of our compromises. We therefore have no right to decline this struggle.

Vaccine passports will introduce a new bureaucracy that will issue the documents, set the rules and standards, and create the structures of enforcement. These structures will not fade with the corona virus. Bureaucracies are resilient and susceptible to mission creep. They continuously seek justifications for their own relevance. The more important their role, the bigger their budgets and the greater their powers.

At first, vaccine passports will certify your SARS-Cov2 vaccinations – two shots, perhaps three. Soon, they might certify your annual or semi-annual shots, chip implants and who knows what else. At first, the passports might be required to travel and access public venues, but soon they’ll be required to unlock your bank account, validate your driver’s license, keep employment and keep your water and electricity from being cut.

For all who think that the authorities woouldn’t get so tyrannical, please start paying attention and heed the lessons of history. The price of liberty is eternal vigilance, and it is well past time for us to be vigilant as unprecedented repression is being planned without any sensible justification. “Freedom is never more than one generation away from extinction,” warned Ronald Reagan: “It must be fought for, protected, and handed on [to our children] for them to do the same.”

We must not go along the march of tyranny like a herd stupefied sheep. We must not doom our children to a totalitarian nightmare that could make the Bolshevik terror or Chinese Cultural Revolution seem mild by comparison. As they gain power, dictatorships turn increasingly malignant. As a witness to the rise of Bolshevism, Aleksandr Solzhenytsin wrote that, “Communist parties, upon attaining power have become completely merciless. But at the stage before they achieve power, it is necessary to use disguises.”

Today, the slithering tyranny has disguised its actions as a fight against a deadly virus. If the virus outlives its usefulness, there are other disguises: racism, domestic extremism, climate change… But we must quickly wise up, unmask these disguises and reject the sinister agenda. In acquiescing to the lies, allowing new structures of repression to ossify and metastasize, our cowardice would deprive younger generations of a future worth living. The struggle has now been imposed on us; our only choice is to muster our courage and prevail. We all MUST say NO! Each and every one of us must firmly state that we will not comply!

Alex Krainer – @NakedHedgieis a former hedge fund manager, creator of I-System Trend Following and founder of Krainer Analytics. He wrote “Mastering Uncertainty in Commodities Trading,” rated #1 book on FinancialExpert.co.uk list of “The 5 Best Commodities Books for Investors and Traders.” His book “Grand Deception: The Browder Hoax” was twice banned on Amazon by orders of swamp creatures from the U.S. Department of State. He writes at ISystem-TF.com and occasionally also on his blog, TheNakedHedgie.com. His views and opinions are not always for polite society but they are always expressed in sincere pursuit of true knowledge and clear understanding of ideas that matter.

6 thoughts on “Why we all MUST reject vaccine passports”