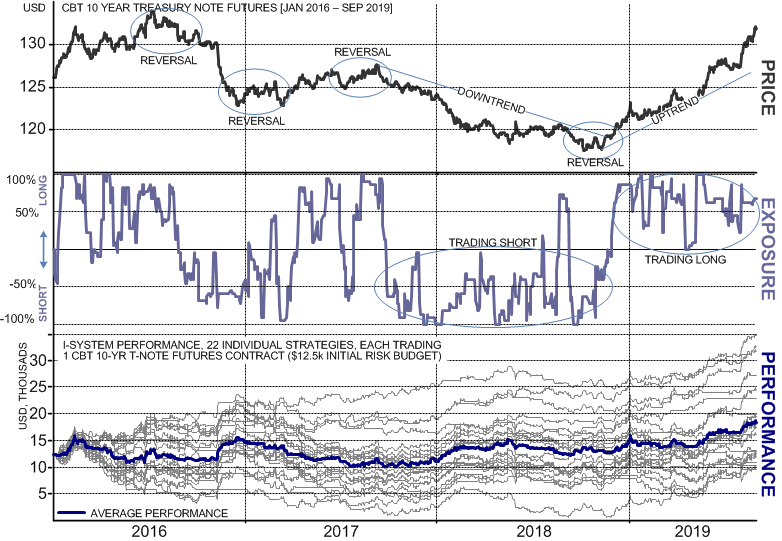 While most market experts completely failed to predict this year’s collapse in interest rates (see the chart below), we traded the event profitably. In this article I summarize the the hows and the whys of our performance.

How did we know to short US T-Notes starting in Q4 2017, then reverse and go long in November of 2018? Did we know interest rates would first rise, then collapse at the fastest rate in 50 years? Are we so brilliant as forecasters? Did we have insider information? The answer is, none of the above.

We did not know what would happen – but profited from the events anyway. Here’s how:

We knew to trade as we did because we rely on intelligent trend following strategies we formulated using I-System model. I-System is a dual  neural network comprising a knowledge framework in market analysis and trading. In practice, it is a reliable trends auto-pilot, capable of deploying dozens of autonomous trading strategies within that same framework of knowledge.

In treasury markets, the price fluctuations, our risk exposure and recent performance are best presented graphically:

US Treasuries have been difficult to trade as prices peaked in mid-2016 with several trend reversals and much sideways consolidations in between. Consequently, navigating the price fluctuations hasn’t been easy. However, as sustained price trends emerged from late 2017 until today (first down, then up), adhering to a set of trend following strategies generated strong trading gains and rose to new performance peaks. The sequence of events shown in the above chart was similar in other markets we traded and the performance of our strategies is illustrated below:

The reason I find this performance remarkable is not because it is spectacular in the absolute sense, but because it is entirely driven by a set of quantitative trading strategies. We strictly did not need to know anything about the economic conditions affecting US, British or German treasuries and interest rates, about central bank and government policies, GDP, employment, inflation, or any other factor. We simply navigated through the uncertainty through disciplined adherence to a set of well-formulated trend following strategies.

These are available on I-System TrendCompass covering more than 200 financial and commodity markets delivered daily to your mailbox. Achieving superior performance over time requires sustained focus on changing market conditions and consistently high quality decision making. Every day in the markets is an opportunity to make the right decision, or the wrong one. The pressure to get it right day after day can be an overwhelming burden for even the most competent market professionals. Thanks to the I-System – probably the best trend following model ever built – we can reduce this burden to simple, executable trading decisions.

Given that we are likely heading into an economic storm, this kind of decision support could prove pivotal.

Alex Krainer is a hedge fund manager and commodities trader based in Monaco. He’s wrote the book “Mastering Uncertainty in Commodities Trading”

2 thoughts on “How we knew yields would collapse?”