It is ironic that  just today I posted an article about the paramount importance of free speech, which numerous government bureaucracies and large corporations in the West seek to suppress in their purported endeavor to police “hate speech.” And just today one of the great media behemoths, Amazon.com suppressed my book (as I expected they might). I assure you there’s not even a trace of hate or hate speech in my book. 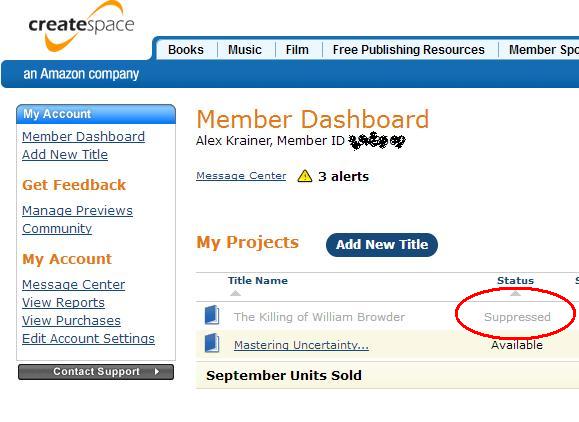 “The Killing of William Browder” is a detailed deconstruction of Bill Browder’s dangerous deception. It shows beyond a reasonable doubt that Bill Browder’s account in his own book (“Red Notice”) is false. Nevertheless, on the basis of that false narrative, Browder has been able to lobby the U.S. Congress into passing the Magnitsky Act which precipitated the new cold war between Russia and the United States. Browder himself is on record stating: “I think we are entering into a hot war right now, and that the best possible outcome is a Cold War.” This agenda is obviously important enough that you are not allowed to know the truth about it.

My book, published only last month (August 2017), was starting to get some traction and in its first four weeks gained very positive reviews from readers (seven 5-star reviews and one 4-star review and no reviews less than 4 stars). That’s when Browder’s legal counsel Jonathan M. Winer stepped in. He contacted CreateSpace and demanded that my book be delisted alleging that it contained defamatory content. CreateSpace promptly obliged, suppressing the book and instructing me that I needed to, “work with the disputing party until a resolution is reached.” Once I obtained the “disputing party’s” agreement, I would need to provide CreateSpace a confirmation from both parties so that they may “take action on the title as appropriate.”

In other words, CreateSpace “burnt” my book at the request of Browder’s lawyers and obliged me to seek their consent to re-release it. The implication of this is very troubling. It seems that privileged elites may stand above scrutiny and deny everyone else freedom to express opinions that are unfavorable to them. By simply claiming that that an author, journalist, or film maker has defamed them, they can force any content they dislike down the memory hole. For authors whose livelihood depends on the content they publish, this could be extremely intimidating and will lead to self-censorship.

Critical books, films and articles are precisely the way we find out about abuse and malfeasance in our societies. They alert us to powerful individuals gaming the system and abusing their privilege. If such individuals can strike any content they dislike off the public record, then how does everyone else learn the truth? Or are we only allowed to know what the lawyered-up elites allow us to know: their interviews, their agendas, their products, their truth?

Without freedom of expression we are vulnerable to manipulation and propaganda that has ultimately led to very tragic outcomes in the last century. This can happen when the voices of ordinary people are suppressed while the good and the great can speak freely to promote their agendas and garnish their public image unchallenged. Criticism of such individuals may not be allowed. Critical reviews of shoddy products and fraudulent practices may not be read. If so, all discussion about issues that are important to society will be shaped by those who can suppress dissenting voices. Such practices befit totalitarian societies and not the free world.

Ultimately, the way we treat freedom of expression will impact the way we shape the world in which future generations will grow up. I would hope that we won’t need to teach them to keep their voices silent and to shy away from questioning or offending the privileged classes of our societies. Otherwise we’ll ultimately have to teach them to love the big brother.

Alex Krainer is an author and hedge fund manager based in Monaco. In 2016 he published the book “Mastering Uncertainty in Commodities Trading.” He also wrote “The Killing of William Browder: Deconstructing Bill Browder’s Dangerous Deception” which is now available under a changed title, “Grand Deception: The Browder Hoax” from The Third Alliance website.

38 thoughts on “Amazon.com burns my book: you should know about this!”